5 Most Expensive Cars from Auburn Fall 2015 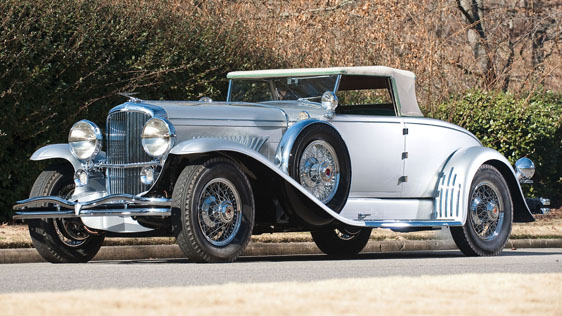 5 Most Expensive Cars from Auburn Fall 2015

Labor Day weekend is time for kicking back, looking forward to the fall and winter months, and spending time with family and friends. If you’re a car collector, though, it’s also a time to travel to Auburn, IN, for “one of the country’s premiere celebrations of the hobby.” In 2015, more than 85,000 car enthusiasts arrived to peruse collections, purchase memorabilia, and take home some of the most valuable classic cars in the world. Let’s look at the top 5 highest priced car sales from Auburn Fall Auction 2015.

Lot No. 2096 “Duesenberg Model J, affectionately named the “Duesy,” continues to represent anything truly great or grand today, regardless of the chosen spelling. It was bankrolled by E.L. Cord and designed from the outset to be the world’s finest car. When the Model J debuted at the New York Auto Salon on December 1, 1928, its launch dominated newspaper headlines.”

Lot No. 5091 “The GT only comes in one model; it’s a tempered execution of the purpose-built racecar that famously won the 24 Hour of Le Mans endurance classic on multiple occasions. The original GT40 epitomized Ford’s “Total Performance” program and was created with just one purpose: to break Ferrari’s dominance of international endurance racing. That goal was realized in 1966 when the GT40 secured its first win at Le Mans, repeating three more times in 1967, 1968 and 1969.”

Lot No. 5127 “While it is no secret that Enzo always developed road cars to fund Scuderia Ferrari racing efforts, the company had a vested interest in appealing to a wide variety of clientele. While never straying from two-door, sporting designs, the company did have the foresight to add rear seats, and so the Ferrari 2+2 as we know it today in the FF or 612 Scaglietti, comes from a long history of important cars. The 365 GTC/4, the “4” denoting the number of camshafts, was introduced in March of 1971 at the Geneva Motor Show. Much like that of the Daytona, it was one of the first Ferraris to clearly have been influenced by the newly installed wind tunnel at Pininfarina. The era of the wedge-design was upon the car world and Ferrari was leading it with flowing lines and Italian flare.”

Lot No. 5138 “The history of this interesting Costin Jaguar starts in 1939. The wiry little ERA (English Racing Automobiles) racers had been tearing up the 1.5-liter and even 2-liter classes in Europe but didn’t have a big enough engine to race against the German Mercedes-Benz’ or Auto Unions or even the Italian Alfa Romeos in that period of the European Driver’s Championship and are now most often referred to as Grand Prix races.”

Lot No. 5142 “When J.L. Elbert wrote his groundbreaking book “Duesenberg: The Mightiest American Motor Car” in 1951, the Model J Duesenberg was only 23 years past its acclaimed December 1, 1928 introduction at the Auto Salon opening in New York. Mr. Elbert wrote in part: “It was a time of solid brass castings and engine-turned aluminum and stainless steel, of natural cowhide and quartered Circassian walnut, of hand-striped canework and whitewall tires white on both sides. Truly it was an honest day for product.”